Our volunteer events help increase education awareness about the marine ecosystem and give an opportunity for the general public, schools and corporations to enjoy each other's company while doing their part to help save Deadman's Island.

The Ecodiscs are by Reefmaker from David Walters.  The fossilized and recycle oyster shell Ecodisc Ecosystem was designed just for Deadman's Island project and the first to be permitted in the State of Florida.  This Oyster shell Ecodisc was created to provide a natural substrate for oyster spat.  Little Flower Catholic School students created the first prototype from this idea. 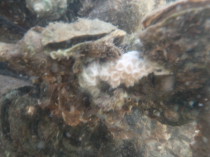 Coral on the Reef!

As a former coral reef biologist from Hawaii, It was exciting to find coral on Deadman's Oyster reef in Pensacola Bay. This Star Coral, Astrangia danae, is not a colonizing coral but solitary and settles on oyster shells in salinities above 20 ppt.  The coral was first discovered at Deadman's Island by noticing a hermit crab with a piece of coral attached to it's shell. Later, it found on the reef during a monitoring session. ~ Heather Reed  Marine Biologist Ecological Consulting Services

Make a Difference Day at Catholic High School setting up the Sporrey-Reed Tents, fish counting and planting vegetation to build up the isthmus of Deadman's Island